March 13, 2017 Comments Off on The Fourth Station: Jesus Meets His Mother 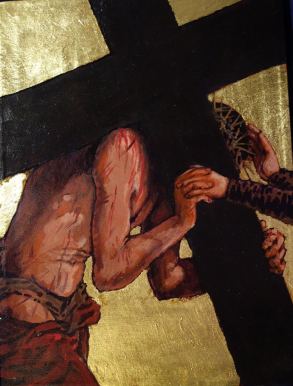 The fourth station of the cross has often been called, “Jesus meets his afflicted mother.” I can’t imagine that “afflicted” does justice to what Mary’s feelings must have been. Afflicted sounds like a sore throat or a head cold. Mary was feeling something much worse. She was in the midst of a nightmare. Her son was taking his final steps. Mary knew it would only get worse as her son’s naked body would be lifted on the cross, left to burn in the sun as he slowly bled and suffocated. More than affliction, this was completely helpless gut wrenching torment and indescribable agony.

Mary had been there throughout Jesus’ life. She gave birth to him, swaddled him, cared for him, watched as he learned to smile, laugh, cry, and walk. She watched him go from being a child into a young man. She watched as he came into his own, a talented Rabbi and a worker of wonders. Mary watched as the crowds gathered around her son, just to hear him, see him, or even touch the corner of his garments. She no doubt hoped along with many of Jesus’ disciples that her son would be the one anointed to restore Israel: the Messiah, a wise and strong king.

Now it was all going wrong. While he once had a band of devoted followers, he now was almost completely abandoned. While people once gathered to hear him teach, they now gathered to mock him. She thought he was destined for glory, but instead he would die on top of a stinking rubbish heap for all to see.

I wondered what I might say to a person going through such a nightmare? What would I say to Mary? Would I tell her that “God works in mysterious ways” or that “God has a bigger plan.” Would I use dark humor to defuse the situation? Would I get nihilistic, saying something about the fact that we are all going to die? If I’m truly honest with myself, I don’t think I would have anything to say to Mary. Sometimes, there is nothing to say, because our words couldn’t possibly fix anything. Sometimes, we can only thing we can do is stand with a person while they are going through a terrible ordeal. We can pause at this station of the cross and stand with Mary. Not trying to make things better, but just to be with her. While we stand there, we ought to remember that we can’t rush the resurrection; we can only stand with the people who need it the most.

You are currently browsing entries tagged with Jesus Meets His Mother at Blog of St. Luke in the Fields.