A View from the Sacristy: Remembering Luke

April 12, 2017 Comments Off on A View from the Sacristy: Remembering Luke

This Lent we have been looking at our patron saint, Luke, who is remembered as an evangelist, a painter, and a doctor. We have learned that the traditions of the church vary widely in relation to the hagiography of Luke. Was he really the author of the Gospel written in his name? Did he really paint the first Christian icons? For many Christians the answer is “yes” and it is really only in the last 100 years or so that these facts would even be challenged. The story told in Luke/Acts has formed centuries of Christian thought, theology, and the popular imagination and the style of Luke’s icons has set the standard for 1500 years of Christian art. What a gift Luke has been to the Church!

On this Wednesday of Holy Week (known as “Spy Wednesday” since this is the day Judas agreed to betray Jesus) I want to look at how the Church remembers Luke.

October 18th is the Feast of Luke the Evangelist in both the Eastern and Western Church. We usually celebrate his feast day in our parish on the Sunday after October 18th and we call it “St Luke Sunday” as a combined service and a parish lunch. It is always a great festive day; a beautifully decorated church, wonderful music, and delicious food.

This day is Luke’s one feast day in the Western Church. In the Eastern Church Luke has a few more feast days. In the West we tend to think of Luke as a companion of Paul who came to the Christian faith through Paul’s teaching and encouragement. Paul mentions Luke by name three times: (i) Phil 1:24 “and so do Mark, Aristarchus, Demas, and Luke, my fellow workers”; (ii) 2 Tim 4:11 “Luke alone is with me. Get Mark and bring him with you; for he is very useful in serving me”; and (iii) Col 4:14 “Luke, the beloved physician, and Demas greet you.”

In the Eastern Church, there are so many feast days because they have a different view of Luke and how he became a Christian. It is believed that Luke is one of the 70 Apostles sent out by the Lord in pairs as reported in Luke’s Gospel Chapter 10:1-12. The Orthodox Church remembers The Sending of the Seventy on January 4th. On April 22nd Luke is remembered with Apostles Nathaniel and Clement who were also part of the 70. So, instead of being led by Paul’s encouragement, in the Orthodox tradition Luke came to Christianity on his own and joined Paul as a companion to help spread the Gospel to the Gentiles. On June 20th, the Orthodox Church remembers the transfer of Luke’s relics from his tomb in Thebes to the Church of the Holy Apostles in Constantinople which we talked about last week.

Christ appears to the Apostles on the road to Emmaus. 6th Cent. Mosaic. Sant’Apollinare Nuovo, Ravenna.

Personally, my favorite Orthodox tradition about Luke centers around the story told in his Gospel of the two disciples who journey to Emmaus on Easter eve. (Luke 24:13-49). This story is appointed for the Holy Eucharist on the evening of Easter Day and for the Third Sunday of Easter this year. One of the disciples is named Cleopas and the other disciple is un-named and tradition tells that this un-named disciple is Luke. Some say that this is obvious as, if the disciple were not Luke, the author of the Gospel would name him, but because of his great humility, Luke was reluctant to name himself.

As a final reflection, let’s look at this modern icon of Luke with scenes from his life. I bet you might be able to  recognize at least five of the scenes depicted here, since we have explored them this past Lent … 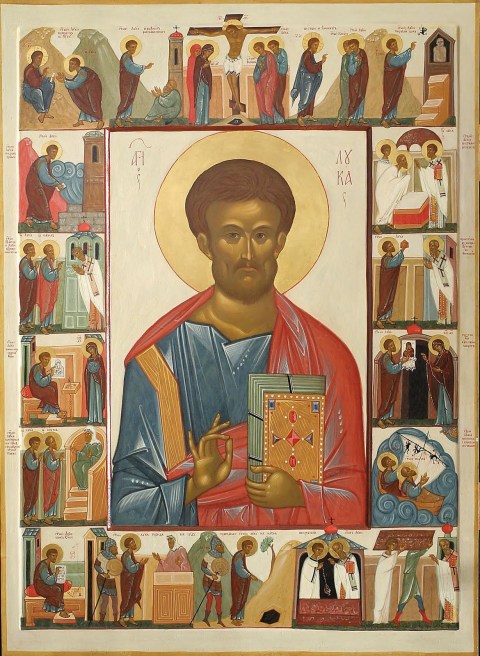 Well, that’s it for another year. Tonight a bunch of Saint Luker’s are looking forward to The Office of Tenebrae at Saint Thomas Church, a rather monastic experience which seems to set the perfect tone to usher us in to the Triduum. I hope these walks with Luke have given us a greater appreciation for our Patron and our guide.

You are currently reading A View from the Sacristy: Remembering Luke at Blog of St. Luke in the Fields.