Yesterday’s results and today’s match up from Lent Madness:

Our Lenten journey is rapidly drawing to a close, friends. Yesterday in a hotly contested matchup between Constance and Julian of Norwich, Julian prevailed 55% to 45%. She will meet the winner of today’s Faithful Four battle between Dietrich Bonhoeffer and Sojourner Truth for the Golden Halo.

To make it to the Faithful Four, Bonhoeffer defeated Athanasius, Barnabas, andColumba while Truth made it past Soren Kierkegaard, Frances Joseph-Guudet, andAbsalom Jones.

We also gave Julian the win with 57% of the vote, but Constance fans stayed strong even chanting on Facebook. 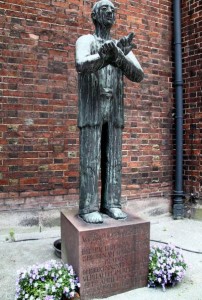 As we begin Holy Week reflecting on the life of Dietrich Bonhoeffer, a man whose lifetime could have overlapped mine if only he had been less courageous and committed to living a fully Christian life, I find myself queasy. Queasy over his gruesome death at Flossenbürg only days before that death camp would be freed by the allied soldiers. Queasy over my knowledge that much as I wish it weren’t true, I wouldn’t have his courage.

Bonhoeffer came from a privileged family where a life of music, scholarship and travel was the norm. Yet when the German Evangelical Church welcomed the Nazi regime into power, Bonhoeffer joined the “Confessing Church” in protest. He began teaching at Finkenwalde, a Confessing Church seminary. But in 1937 the Nazis declared the teaching of these students illegal. After two years of being banned from teaching and even from public speaking, Bonhoeffer left Germany to teach at Union Theological Seminary in New York City.

Within a few weeks he felt that he had made a mistake and made plans to return to his homeland. His New York friends, fearing for his safety, encouraged him to continue doing God’s work of teaching and preaching far from the threatening Nazi regime. But, he opted to go back to Germany knowing of the dangers.…Read more here.

When I started researching Sojourner Truth, I knew about what a 5th grader knows while doing a basic report for Black History Month: she was an ex-slave in early America, and gave a famous speech about women’s rights. She had that catch phrase, “Ain’t I a woman?” which made her sound folksy, like someone you’d want to drink a beer with.

What I did not expect was how stone cold brilliant she was. She spoke Dutch and English fluently. She spoke extemporaneously about political and social issues with more persuasion than men like Abraham Lincoln and Frederick Douglass. She carved out a place and a name for herself with little more than her wits. Her words remain as wise, as relevant, and as slyly funny as they were in the 19th century. (“Oh no, honey,” she said once. “I can’t read little things like letters. I read big things like men.”)

Sojourner was so prescient as to be eerie. Her advocacy of prison reform, for the abolition of capital punishment, for the rights of women, and for Black women specifically, reflect concerns that few others were talking about at the time, but would occupy American politics years in the future (and continue to occupy us today)....Read more here.

You are currently reading Lent Madness: Dietrich Bonhoeffer vs. Sojourner Truth at Blog of St. Luke in the Fields.