March 2, 2016 Comments Off on Lent Madness: Barnabas vs. Elmo

Yesterday, on the Lent Madness version of Super Tuesday, Frances Joseph-Gaudet left John Mason Neale singing the blues as she handily defeated him 68% to 32% to advance to the Saintly Sixteen, where she’ll face Sojourner Truth.

On the St. Luke’s Blog, Frances comparably secured 67% of the vote! 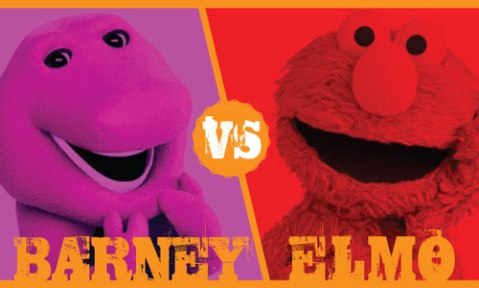 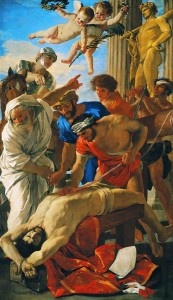 Elmo, Bishop of Formium, was martyred in 303 in Italy. He is one of the Fourteen Holy Helpers. Also known as Erasmus, Elmo fled Formium during the Diocletian persecutions. Legend tells us an angel commanded Elmo to return and proclaim his faith.

During his journey back to Formium, he encountered two soldiers who inquired about his faith. When he confessed he was a Christian, Elmo was promptly arrested and tortured. Depending upon the source material, Elmo was bound in iron chains, put into a pit filled with snakes and worms, sprayed with boiling oil, covered with sulfur and/or molten metal, thrown into a barrel studded with spikes and rolled off the top of a mountain, drawn and quartered by horses, and/or seated and baked in an oven.

Miraculously, he survived this trial and was imprisoned but later freed by an angel… Read more here. 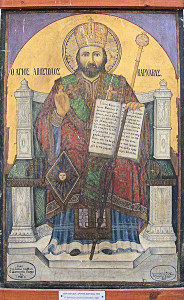 Throughout Acts, Barnabas is a model of grace and compassion. In our first encounter with him, he is singled out among the believers as one who sold a field that belonged to him and laid the proceeds at the apostles’ feet. Barnabas is the first to welcome Saul/Paul to the community in Jerusalem. Although the other disciples shunned Saul/Paul out of fear that he had not really become a disciple, Barnabas vouched for him and allayed their fears.

Perhaps nothing speaks to Barnabas’s graciousness so much as his ability to work with the notoriously prickly Apostle Paul. After welcoming Saul into the community in Jerusalem, Barnabas went to Antioch to lead the church there. He invited Saul (now known as Paul) to co-pastor the community. They worked together in Antioch for one year. According to Acts, Paul’s so-called “First Missionary Journey” was actually not Paul’s at all. Acts lists Barnabas first, as the one set apart for the journey. In one particularly telling episode, the residents of Lystra describe Barnabas as Zeus and Paul as Hermes....Read more here.

You are currently reading Lent Madness: Barnabas vs. Elmo at Blog of St. Luke in the Fields.