After another first round rout in yesterday’s contest between Sojourner Truth and Soren Kierkegaard (77% to 23%), today in the Lent Dome Lawrence squares off against Albert Schweitzer

On the St. Luke’s Blog, we were quite in line with the rest of Lent Madness giving Sojourner 78% of the vote! 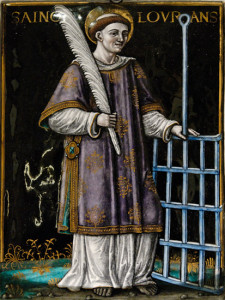 Lawrence of Rome was a deacon who was martyred during the Valerian persecution of the Roman Church in 258. As he watched Pope Sixtus II being taken into custody, Lawrence cried out, asking Sixtus, “Father, where do you go without your deacon?” Sixtus replied that he would not leave Lawrence, but that Lawrence would follow him in three days. Upon hearing Sixtus’s statement, and in apparent joy that he would soon meet the nearer presence of the Lord, Lawrence went out and offered all he had to the poor, the widowed, and the orphans of Rome, even selling the vessels of the church to increase the amount of alms to distribute. When a Roman prefect became aware of Lawrence’s fire sale, he charged Lawrence to yield all the treasures of the church to the emperor within three days. Lawrence agreed to do so…. Read more here.

Polymath Albert Schweitzer was born January 14, 1875, in Kayersberg, Germany (now France). He was the son of a Lutheran pastor and studied theology at what is now known as the University of Strasbourg. He wrote many important volumes, perhaps none as influential as The Quest for the Historical Jesus. He was also an internationally regarded concert organist and musicologist.

In 1905, at age thirty, Schweitzer felt called to take up medicine to help those in need. Eight years later, Schweitzer and his wife, Hélène, founded a hospital in Lambaréné Gabon in French Equatorial Africa. In 1917 they were sent to a French internment camp as prisoners of war...Read more here.

§ One Response to Lawrence vs. Albert Schweitzer

You are currently reading Lawrence vs. Albert Schweitzer at Blog of St. Luke in the Fields.