March 27, 2015 Comments Off on Lent Madness: Frederick Douglass vs. Egeria

The next match up is Frederick Douglass vs. Egeria. 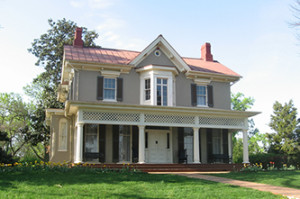 Every tourist to Washington, D.C., visits the Washington Monument, Lincoln Memorial, and Capitol Building. Such sights are classic but they’re so…pedestrian. If you want a bird’s eye view of the city and an opportunity to imagine a day in the life of one of North America’s greatest embodiments of faithfulness, wisdom, and activism, head south to Cedar Hill, Frederick Douglass’ historic and beautifully restored property in Washington’s Anacostia neighborhood. There you’ll have a chance to walk his expertly manicured lawn, which Douglass tended and on which he lifted weights each morning.

Yes, my friends, Douglass was a fitness buff and a naturalist who tended to his body and garden with great affection and detail.
Indeed, he was a well-rounded man long before “well-rounded” became a buzzword on college applications...Read more here.

Egeria, kindly recollect, was a Spanish nun who travelled to Palestine, Turkey, and Greece from 381-384 CE, and wrote letters home describing her adventures. As befits one of the first Pioneers of PenPals, Spain issued a stamp for her in 1984.

Somewhat confusingly, there is also a tropical aquarium plant named for her. Because
every trip around the bowl is a pilgrimage for a goldfish who can only remember 30 seconds worth of stuff!

Once she returned home, however, I feel confident in asserting that Egeria had a garment similar to this to notify people of her travels. Egeria is invoked as an authority by the custodian Franciscans who live in and care fore the Holy Sepulchre in Jerusalem, and they invite you...Read more here.

You are currently reading Lent Madness: Frederick Douglass vs. Egeria at Blog of St. Luke in the Fields.