Lent Madness: Dionysius the Great vs. Irene the Great

March 9, 2015 Comments Off on Lent Madness: Dionysius the Great vs. Irene the Great

Cecila won 70% to Balthazar’s 30% on the blog! Clearly the musicians won this battle.  And indeed on the Lent Madness site, Cecilia also trounced Balthazar, 74% to 26%.

Today’s match up is Dionysius the Great vs. Irene the Great. 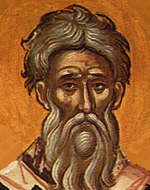 Dionysius was born sometime around 190 to a well-to-do pagan family. He attended a church school and was educated to be a priest. He was a bright and well-read child and a student of the scholar Origen. Dionysius became head of the Catechetical School of Alexandria in 232 and was elevated to Bishop of Alexandria in 248, succeeding Heraklas in both posts.

In 249 a series of riots broke out and anti-Christian violence ensued. This soon evolved into the Decian Persecutions. Christians were subjected to all manner of torture and cruelty, with the goal to force them to sacrifice to false gods. It was a time of martyrdom and forced migration as many fled to the deserts for safety….Read more here.

Named Penelope and born as a Persian princess in the fourth century, Irene the Great is a legendary figure credited with miracles that astonish the modern reader. To keep her from hearing the gospel, her father (the pagan king Licinius) isolated her in a high tower like a Rapunzel of late antiquity, where she was watched over by thirteen young maidens and the statues of ninety-eight gods. She desperately objected to her seclusion and isolation from her mother and even the sunshine, but Licinius would not relent and sealed her in the tower with his signet ring until she was to marry. In spite of her father, an elderly tutor was hired to teach her. Servants hauled him up into the tower by an elaborate pulley system, and he spoke to her from behind a curtain and taught her about Jesus Christ.…Read more here.

You are currently reading Lent Madness: Dionysius the Great vs. Irene the Great at Blog of St. Luke in the Fields.