Today’s match up is Balthazar vs. Cecilia. 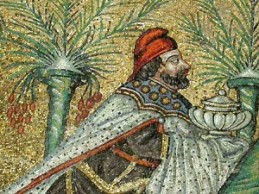 The story of the Three Wise Men is a beloved part of Christmas crèches and pageants, albeit exercising a bit of editorial license. In Matthew’s Gospel, the text only says that sages and magi traveled from the East to find the infant King — not how many there were or what their names were.

Nonetheless, over time, tradition has narrowed the number of the Eastern travelers….Read more here.

Cecilia is the patron saint of singers, musicians, and poets. She was martyred in Rome in the third century. Finding historically factual information regarding her life is a real heartbreaker and can shake the confidence of even the most devoted researcher.

Nevertheless, it is believed that Cecilia was born into nobility and privilege. She was a woman of strong faith and was credited with converting four hundred people. She was married to a pagan named Valerian. With Cecilia’s faith as a living example, Valerian and his brother Tiburtius, along with Maximus, a Roman soldier, were converted. After their baptism, the two brothers devoted themselves to burying the martyrs who were being slain daily. In about 230 CE, the brothers were arrested for practicing their faith. They were executed—and while she was burying her husband and brother-in-law, Cecilia was arrested.…Read more here.

You are currently reading Lent Madness: Balthazar vs. Cecilia at Blog of St. Luke in the Fields.