The Fourth Station: Change or Be Destroyed

March 12, 2010 Comments Off on The Fourth Station: Change or Be Destroyed 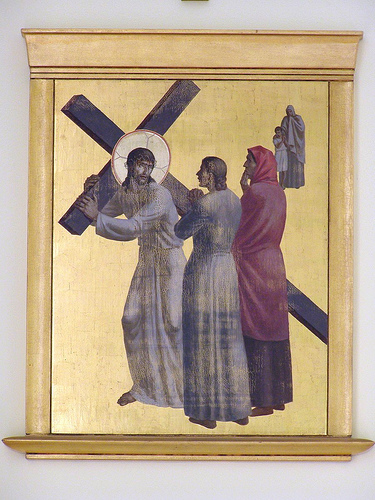 On the road to Golgotha, Jesus meets a group of women, who are wailing and crying. They are witnesses to his failing strength and torture-torn body. They can feel his suffering and are already mourning him as if he were dead.

In spite of his suffering, Jesus’ focus is outward toward the people of God. Even though staggering toward his execution, he can not turn his back on his people. Still trying to fulfill his mission, he makes one more attempt to let the Israelites know what is to happen to their Temple and city if the authorities do not change their self-interested leadership of Israel and if the people do not turn away from the law and back to God.

Since his words have had little impact on the men and since he knows that his own disciples are in hiding, Jesus proclaims his message to the grieving women. He tells them about the coming destruction of the Temple and the decimation of Israel. I have often wondered why he made the women the vehicle for his last message since women, in general, had no voice in politics or in the synagogues.

I would like to think it is because something special was happening and in some way he was affirming women’s role in his ministry, and it certainly is possible that is the case. But the more I think about the passage, I realize that it doesn’t matter who was the vehicle for Jesus’ last message. It was the message itself that was important: Change or be destroyed.

In this century, our nation faces social, economic, and religious challenges. The economy is stagnant. Many people are unemployed and many children are hungry. Domestic abuse against women and children is rampant. Foreclosures have increased and banks are failing. Society is not inclusive, and culture in many places still teaches that people are not equal. Church membership and attendance is declining. We are in a war that is futile, and our leadership appears to be plagued with moral and ethical issues.

Change or be destroyed that was Jesus’ message. Even in the last hour of his life, he could not give up on the people. In today’s world, we are the body of Christ. As a result, no matter how frustrated we are, we can’t give up. As a matter of fact, I shudder to think where we would be if God gave up on us as he did on Noah’s generation, or where we would be if Jesus had given up on his people. For the sake of the world and all that it encompasses, as Christ’s body, we must continue to proclaim the gospel and remind people that we have to change or be destroyed.

You are currently reading The Fourth Station: Change or Be Destroyed at Blog of St. Luke in the Fields.