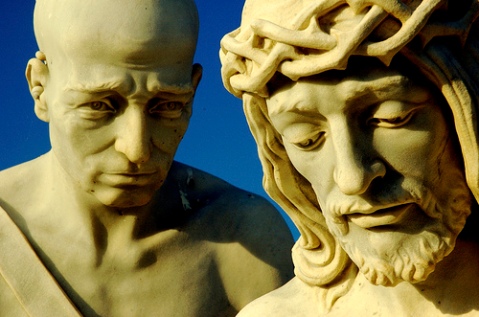 “Sticks and stones may break my bones but words can never hurt me.” This playground mantra is in fact a lie—we know it, and Scripture tells us so, over and over. Scorn, mockery, contempt, sneering—dissing—is a powerfully destructive force and damages plenty. The Bible takes it very seriously, from the Psalmist’s laments right on through to Jesus’ journey to Calvary. Stripping off Jesus’ clothes is the outward manifestation of his enemies’ effort to crush his spirit, make him a nobody.

Dissing can ignite rage strong enough to make us murderous, attacking us in our core sense of self. It can seep into us so that we doubt our own worth. When I reflect on what Jesus endured, how he bore it (and as perfect victim became perfect victor), I begin to see this part of his ordeal as an integral part of his sacrifice on Calvary, his redeeming work on my behalf. Scorn did not prevail with him — and because of him it has no authority over you or me either.

Here are the texts Candace referred to for this reflection:

Matthew 27: 28-35
They stripped him and dressed him in a scarlet mantle . . . crown of thorns . . . mock, spit, beat . . . they took off the mantle and dressed him in his own clothes . . . after fastening him to the cross they divided his clothes among them by casting lots

John 19:1-25
Crown . . . robed him in a purple cloak . . . Jesus appears before Pilate wearing the crown and the purple cloak. Pilate says “Behold the man!” . . . the cross . . . the soldiers took his clothes and divided them into four parts, one for each soldier, leaving out the tunic. Tunic was seamless, so they cast lots for it “and thus the text of Scripture came true: ‘They shared my garments among them and cast lots for my clothing.’”

§ One Response to The Fifth Station: Reflecting on Jesus’ Sacrifice

You are currently reading The Fifth Station: Reflecting on Jesus’ Sacrifice at Blog of St. Luke in the Fields.